If You Want To See The Quilt... 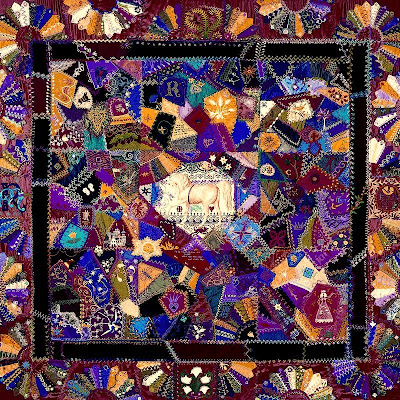 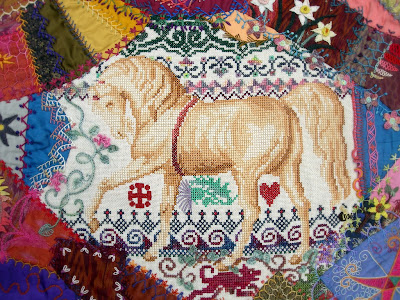 It's hanging at 'Craft-Paks' in Heathmont. Canterbury Road at near the top of the shops there, on the right as you travel out of the city. Melbourne Australia that is. Check out the Classes List.
I have to tell you thie photo of the whole quilt is LOUSY! This detail of the centre shows the colours much better. It's warm and rich, not bright and crisp. In fact, the photo makes it look like there's a lot of blue, when their is hardly any at all.
The (2 metre square) quilt is over ten year old now. For the uninitiated, it took me about 3 1/2 years of solid, frantic work to make it. A conservative estimate of 3000+ hours.
Go to the Crazy site for other pics and some student work.
Posted by Bobby La at 1:22 pm 1 comment:

Back To Work On The Rabbit's Cubby, Yipee! 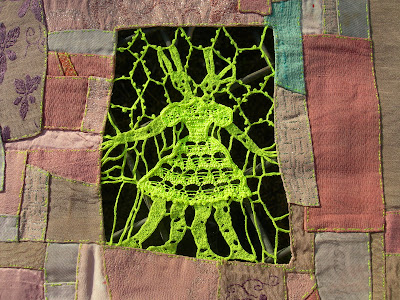 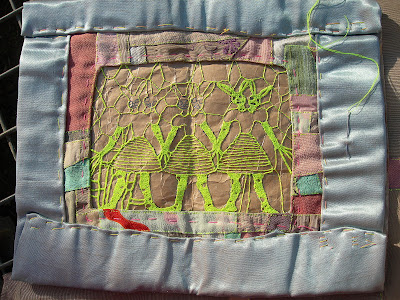 I've been a bit unwell. That old girl's disease: Graves Disease, which sounds way more impressive than just saying a boring overactive Thyriod. Good way to shift those stubborn kilo's. Whoo Hoo! Almost back to normal now and the only reason I mention it is that I'm suddenly frantic to resume my frantic stitching pace. BUSTING! Seems like the last 6 months have an ample excuse now (for apparent laziness and lack of motivation that is).


Back to The Rabbit's Cubby. Yay!


The time off has given me perspective on a few things. Design things I mean. I've been getting the pieces to an almost finished point (maybe ten or more so far), not being sure how I want to bring it all together but neither am I worrying about how just yet... I prefer to let things buzz around in my head until the 'abstract' idea takes form... and I think it has. The lace pieces are a happening thing in my mind, and that's good too! It's all good!
I want to stitch my little fingers to the bone as I've always done, as fast as I can.


It delights me so much I can hardly bear it. I'd be terribly easy to satisfy on a desert island or er... ah.. in poverty. Just a scrap of paper, fabric and a reel of cotton. In fact, with the lace you only need thread! And paper and maybe a scrap of contact to keep it all in place. Oh yes and a needle. Probably a pencil. And my glasses and I'd have to take the children and of course the grandchildren. And my light.


So just to remind you and myself... here are the pictures again.
Posted by Bobby La at 9:33 pm 3 comments:

She's over here in all her glory.
Posted by Bobby La at 6:17 pm No comments:

I Know It's Not Stitching But...This Is Good.

I had an amazing experience this weekend. I bought a monthly train ticket at the cost of $76.50 or therabouts. I bought it maybe last Tuesday or Wednesday. Saturday I had to catch a bus to pick up my adorable grandchildren for the inaugural babysit with Sadie, now 8 weeks... anyway, I'm about to get on the bus and I get out my little MET folder for the ticket and the ticket's not there! EEK!
I thought, appealing to my calm inner self, that it must have fallen out in my bag, which was at home. So I do the swap with my daughter and bring the kiddies back to mine, where my parents (and this has nothing to do with anything, just thought I'd tell you) picked up the little boy so I could concentrate on baby... THEN I looked for the ticket, which had 26 days left on it by the way.. and NO TICKET! My heart sank right to the pits, I can tell you. How will I tell him who deserves to be told but who would justifiably not be impressed. $76...
I rummaged in the bin for the last months ticket, kept the day's ticket in a probably vain attempt to indicate my legitimacy, hoping the ticket man would remember me...
I didn't sleep too well, not just because of night feeds, but because after baby was back in bed I'd lay awake, worrying and fretting and feeling dread.
Sunday afternoon. I thought I'd walk past the bus stop and have a look, not expecting anything. Problem is, of course, I validated the ticket when I got on the bus so if I dropped it, which I obviously did, then it would have been on the bus... but I had to try something.
So I bundled (cutest ever) baby into pram and walked down. About 12 of so metres before the stop, I picked a ticket up off the ground... AND IT WAS MY TICKET! I couldn't believe it! I checked it at least a dozen times, getting it out carefully, but yes it was. Is. Crinkled from the downpour but clearly vivisbly mine.
Amazing.
Posted by Bobby La at 1:52 pm No comments: