The Original & The Best
Posted by Bobby La at 7:25 pm No comments:

The One True's Preliminary Sketch For His Rug 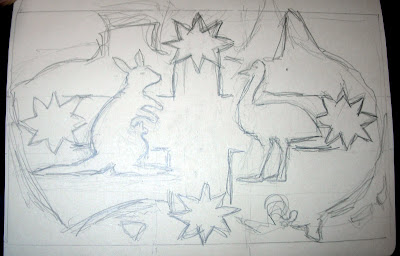 All worked out with the Golden Mean, of course (ha ha ha). The Aussie crest, and the Eureka Flag.
My great-great-great John Smith was at Eureka.

We'll stick a bit of wattle in the middle somewhere.

'Here's the mighty wattle
The emblem of our land
You can stick it in a bottle
Or hold it in your hand.' (Barry Humphries)

Notice where he plonked Tassie.
I will do it Magdelena Briner Eby style, unless he has other plans for me, which is very possible. I thought this would be good to have on the go, for when I don't want to be too fussy. Country job... although that's an in joke around here because we always end up being fussy.
Posted by Bobby La at 8:25 pm 1 comment: 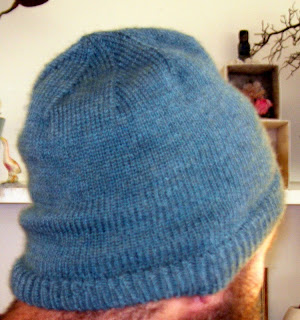 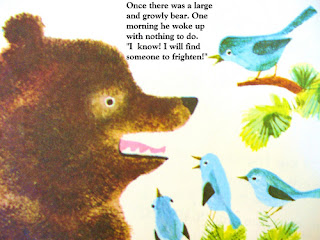 Lucky the husband is being nice. Although if he says one more time that I ought to have done a few preliminary drawings, I may have to frighten HIM. Boys always have a solution that would be helpful IF I WAS ASKING FOR ONE!
With all of my vast experience in colour and tone, and with years of teaching how to find your pleasing group of colours and SO ON... EVERY time I delve into a new medium I don't immediately take the knowledge with me.
So, rather than build a pile of colours that look lovely together at the outset, I have followed wrong thinking and ended up with a big pile of... Mud!
I love each and every colour. The tans are just completely gorgeous, and so I enjoy every stitch/hook. I'm immersed in the beauty of the textile and the joy of fibre. Likewise the greens. Yeeuum!
I could go on.
So, note from every class I have taught in 18 years: Begin with the colours (fabrics) you simply MUST use. Then add others to the pile that make these colours look happy. You might want to have a limited palette... or not, but in everything, these colours must be happy together.

I have just removed the whole of the foliage. I haven't liked it ever but didn't listen.
Starting again. At least the background (a must have) and the flowers are almost completed.
Posted by Bobby La at 8:58 pm 1 comment:

Just About To Remove The Greens

It's worth the bother to undo. If this is going to be around forever, then I'll be annoyed forever and I'll cringe when my great-great-grand-daughter's admire my work. Best to fix it now. After all, no-one s making me do this and what's the hurry?
Posted by Bobby La at 2:06 pm No comments:

Uzbekistan Rug On The Move