We had an amazing extended weekend at Caulfield. It was the first time Rug Making was represented in the Guild area of the Stitches & Craft Show in Melbourne. Interest was constant, with our girls demonstrating for most of the day, every day.
Many, many people were surprised to see the rugs, especially Anne's Proggy rugs. "Oh I remember these!" was heard often. A nice memory.
Lots of folk remembered the day when they all sat around cutting or prodding or collecting rags for the rugs. 'Clippy' or 'Peggy' or 'Proddy' rugs, depending on where they were from. One gentleman said his mother covered the whole house's floors. One alone covering the entire lounge floor! He and his siblings had to cut the strips as well as muck in. Even the father's were involved.
Perhaps we'll find that some of the interested ladies will come and join our little group.
It was obvious that a spark was lit in people's imaginations and we want to take over the world with rug enthusiasts.
Demonstrating Proddy Rug all day over the weekend, on Hessian, I discovered how easy it was myself! I'd been using Latch-hook Canvas (an Op Shop find) and now I'll never use it again. Hessian is so much easier. No wonder I thought Proddy's a bit difficult. The Hessian is pliant and user friendly and I can't wait to get to it!
We had loads of fun and I fell exhausted into bed last night, happy that today is a day off.
Photo's to follow....
Posted by Bobby La at 8:28 am No comments:

The Victorian Rug Group, as representatives of the Australian Rug Crafters Guild, will be at the: Stitches & Craft Show, Melbourne, October 24 - October 27, 2013, Caulfield Racecourse, Station St, Caulfield East. This is the first time Rug Hooking will be displayed and demonstrated at this annual craft fair! Judging by the reception in the show at Perth, Western Australia, we expect to be run off our feet. Our group is very excited and hope to inspire as many people as can be to take up this interesting and enjoyable craft. There will be lots to look at and you might like to have a go yourself. Ask questions, share stories or just come to see what we're banging on about the whole time! Come up and say Hi! We're situated on the top level, up near the coffee.
Posted by Bobby La at 6:32 pm No comments:


This is my One True's influence on the world. They sing for their breakfast and he knows them well.
Posted by Bobby La at 8:30 pm No comments: 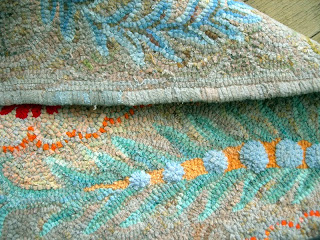 I used my excess fabric to cut strips and bind the edges of the rug. I love it. It's a tiny weenie bit tedious but fits right in with the colour and texture. I tucked the ends under the top at the start, then the back for the finish of each worm.
Posted by Bobby La at 8:28 am 2 comments:

At last! Bound edges, on the floor, underfoot, in situ, all done. The binding may be a little full and therefore ever so not flat, but it seems to be settling. I'll photograph the edge in the daylight.
I am happy with it. It reminds me of Grandma's carpet, although it's nothing like it. Just like the carpet left over from the 50's or even 40's. Nice. Grandmaesque, like me.
The shape's a bit weird though. Maybe good for in front of a hearth (during summer), but it's way too small for my original thought of in front of the couch. Never mind. I have it on my side of the bed.
At least the One True likes it now. He loves the effects you get with hooking. Mosaic like.  If only I could drag him away from his watercolours to design his rug. Lazy.
Just to add... I bound the edges with more of the same strips. Fold the hem over twice as if you were hemming, but to the front, then round and round and round. Tucking the start and finish in under the previous wraps. The start, under the front or top and the ends into the back bit. Long and tedious but lovlier than I'd thought previously.
So, onto the next now!
Posted by Bobby La at 11:48 pm No comments: