Sneak Preview. Inside The Cat Dress 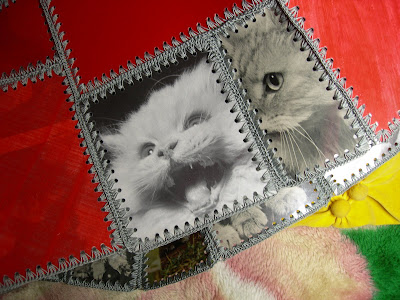 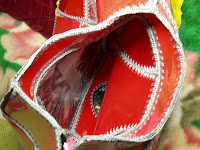 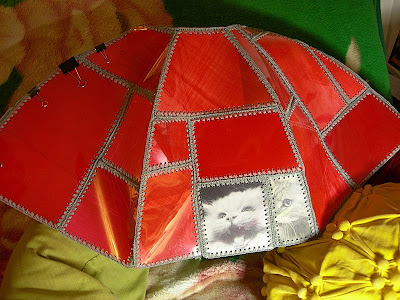 If I wasn't busy with bean bag and now reeling with temperature and sinus and headache and blah, it'd be finished. In fact it is, excepting for the edges (picot, maybe?) and the buttons. It's for real, for someone to model. I doubt I'd find a dycephilys twin to model the other dress.
I need to find some five year old twins, though I haven't started the other dress yet. Anyone out there?
Posted by Bobby La at 8:52 pm 1 comment: 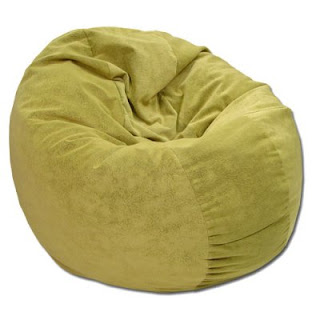 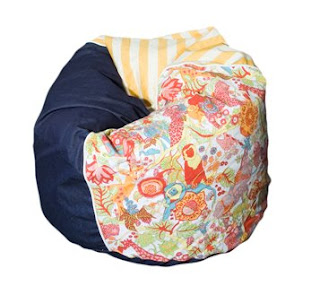 I thought I'd better give you this link before I lose it. Thankyou, anonymous people I lifted the pictures from.
You know, I kid myself that this is a you-beut way to use up some of my vast fabric stash, but now I have three enormous bags of bean bag fill, which, if I don't get around to it, will take over my whole life. Every new idea generates it's own little eco system. I have a complete infrastructure for each method. I've enough cards and Mills & Boon's to make as many card things as I could ever imagine, plus a plethera of childrens books for lamps. Wagga fabric, which is very bulky, to populate the entire family into the third generation. And did I knit three facewashers? Well, the idea is to use up your scraps but Oh No, I bought more cotton today.
Posted by Bobby La at 6:04 pm 1 comment:

Oooh! Baby Things! And Owls For My Mum 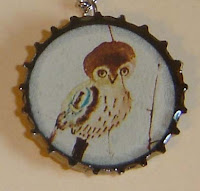 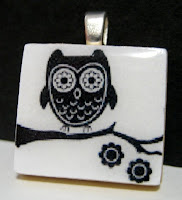 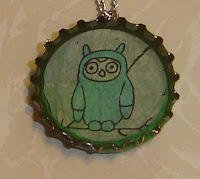 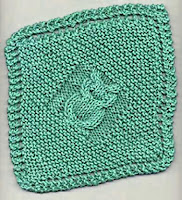 A must do. Mum had a large collection of owls and we're all taking them to heart now.
I bought a size OOOOO jumpsuit yesterday and even the One True squealed with incredulity at it's little, tiny, eensie boopiness. Are they ever that small! he exclaimed. Though if the baby is the size it's (his...? her?) father was, it will fit perfectly at the 35 week gestation point. He weighed 9lb 8oz, which isn't as big as others I know, but was plenty big enough. Now he's 6ft 5 inches. I'm proud of that, illogical though it is.
Anyway... I found this lovely place this morning and hope to take advantage. Then I got distracted by the many washcloth sites (come on guys... it's Facewasher). But I haven't brought the right sized needles. Ouch! So here I am blethering aimlessly to youse lot.
Posted by Bobby La at 8:34 am 1 comment:

There's A New Little Melia On The Way 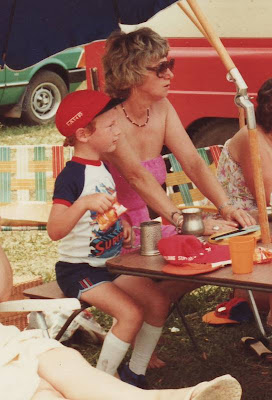 My darling first-born (seen here with his Mormor) is gonna be a Papa! And that means I'm going to be a Grandma even more than I am now!!! It's very exciting!
I'm quite emotional about it. And Rob can't stop grinning. I'm worried his face will split. I'm looking for a perfect Teddy Bear or something fluffy but not crass... and there's quilts to embroider and Wagga's to make and singlets to embroider and Oh Oh Oh!
*
*
*
*
I'm very teary because Mum misses out. Rob doesn't get to share it with her either. He was my Mum's little boy. The first grandchild and her darling. Cycle of life huh? Still hate that. I have less ability to deal with it as I get older. I'm weary. I want the new without it meaning out with the old.
Posted by Bobby La at 9:48 pm 4 comments:

Look What I Got From The Oppie 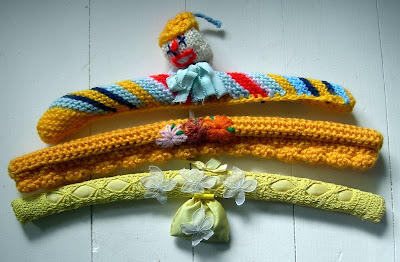 I have the worlds largest collection.
Just made a new group in Flickr. Couldn't believe it... there isn't one solitary group dedicated to this fine craft.
Posted by Bobby La at 6:39 pm 2 comments:

The Good Girls. Finished, But Not Mounted Etc. 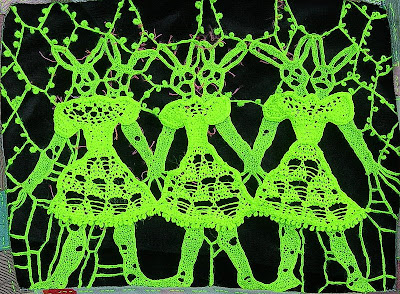 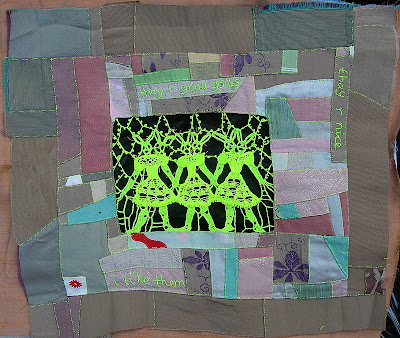 I h a t e the part where you have to pick the couching thread out. (There's that word again, I might get in trouble), and they're not pressed or stretched or anything, but you get the idea. I have two more to do in this series.
Posted by Bobby La at 6:08 pm 2 comments:

I Don't Really H A T E Them 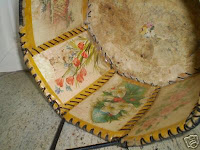 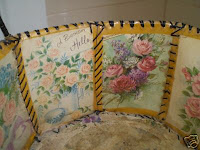 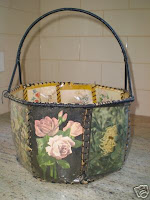 I've never been one to maintain my rage.
Thing is, on reflection... and Shules, don't think I'm succumbing to the man or anything... but, on reflection I think I may not have offered a very good picture of what I want to do. I so completely hate the wankiness and whilst I might struggle to formulate a cohesive 'body' of work myself, I kind of expected them to trust me to get it together rather than convinced them of it. And I will have a good grouping, don't worry about that. I'm too flip when I describe the plan, and I try to fit their criteria instead of sticking to mine.
I have very strong opinions about the crafts and my place in its history and evolution.
Next time I'm letting someone else write it.
And can you believe it, someone flagged my blog as being objectionable. Huh?? What's that about? It's my blog and I'll cry if I want to.
(I see... You're not allowed to say 'hate'. Oooooh!)
Posted by Bobby La at 8:17 am 2 comments: 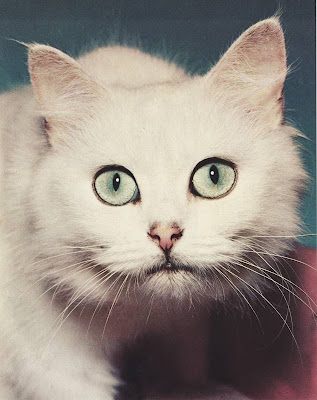 After all, there's so much stitching to do. I love the newest dress so much and I love to stitch! Some girls at my state school had each a skirt I coveted A LOT (you know who you are). They were 1950's fabric and style skirts (after all, this was early 60's) and had either dogs or cats around them in a 1950's painterly style. I thought they must have been rich to have such beautiful skirts. They, as it happened, thought we were rich because we had new clothes all of the time, which was actually the result of having a tailor for a grandmother and coming from a long line of milliners and tailors and so on who set the pace for splendid fashion.
Anyway, now I'm making my new twin dresses even better than those coveted skirts. At least just as desirable and moving. It takes me back to that big sighing love I felt at state school. Pics to follow soon!
P.S. Thanks Shula, for the rant and the pat on the back and the you're better than they are and the general friendship. It's not so bad really.
Posted by Bobby La at 8:41 pm No comments:

Ok Ok Ok... I didn't get a spot at Craft Vic. And I'm a not so good loser ( I'm a dreadfully gracious winner though). My concept needs developing, as it happens. The thing is, I agree that my concept (as required in 100 words or less) was weak and vague and at best a 'perhaps' because I don't know nor care what my psychology is and was stabbing at a possible cause for my interest in conjoined bunnies. And who am I to say. AND, I don't care.
I like making things. If my gut tells me it's right, I do it and I feel strongly about it too, like a real artist. Damn having to explain myself.
I love the history and development of techniques in (needle) craft. You can only respect those (mostly) women who made beautiful things to wear or to make their homes pretty, and then thought of even more interesting things to do with the orange plastic net bags you buy oranges in. Things that look like actual flowers when they're on top of the fridge and you're over the other side of the room. I think such an ironic conceptualisation of the natural evolution of plastics in a post-modern world is brilliant and I want to further their cause.
So I'm terribly shitty. Terribly, terribly, really annoyed that the "Art World" continues with the myth that Art is neccessarily defined by Concept. In fact, the Art is in the Concept. The medium and imagery, the skill and graphic workability is not secondary, but unimportant. The importance of the object is relevant only as seen through it's justification.
Not that I'm so brilliant. But, anyone's work should speak for itself. And I intensley dislike the need to spin. And now I have to apply myself to spinning even more, and I wanted it to be over and done so I could get on with the work. 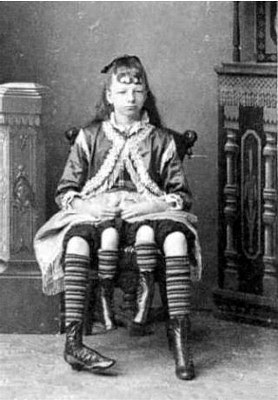 I saw Myrtle Corbin's photo in a movie yesterday... 'Fur'. Nicole Kidman played the part of Diane Arbus, the woman who photographed people who lived on the fringe of society. Nicole acted limply. Like a wet, thoughtful snail. Gratuitously condescending, contemplating the 'freaks' of humanity with maternal affection (as seen by the tilt of head and kind smile playing at the corner of her mouth) and long, ponderous looks with pooling blue eyes. What could have been a good story was, you guessed right, turned into a Hollywood romance/tragedy. When she shaved the hairy man I wanted to snatch the razor from her insipid, caring hand and get the frikkin' job done! Pronto!
BUT, the colours were beautiful. I like the apartments a lot. I had a dream where we lived in those colours. I used to have coloured walls and it was so nice.
Oh... Myrtle Bunny is over here.
Anyway, thanks for listening.
Posted by Bobby La at 8:28 am 6 comments: