I Am So Happy La! 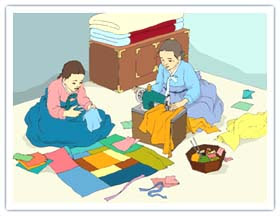 This is a portrait of ME (sans sewing machine)! I'm so fast, it looks like two people in the picture, playing like a little piggy in sloppy, steaming, stinky, squishy, yummy swill! Yes! I'm very busy, don't you worry about that.
Even though we have to move before March.
Posted by Bobby La at 9:09 pm 1 comment: 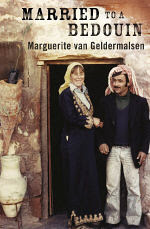 I thought the title was embarrasing and seemed a bit patronising in some way??? Whatever it was, I hid the cover on the train while I was reading so as not to offend. I wondered if it would be an annoying book, but it's not. In fact it's lovely. The author (Marguerite Van Geldermalsen) (seemingly) had no agenda, no hippy ideal of becoming a local, no stupid thought to bring new ideas into the culture nor, it seems, to avoid them.
In other words it was refreshing. Just a gal who joined a different society to the one she grew up in. Simple.
Sometimes I wanted her to let loose a little and whoop or glow loudly with the in-loveness of it all, but there you go.
I'm in love with Jordan, specifically Petra, and with the other books I told you about, have loads of respect for the hospitality of the far east. They eat and drink tea together a lot and there's nothing wrong with that.
'' 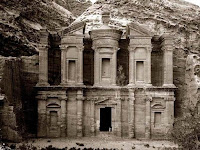 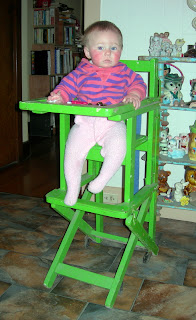 It folds down to be a low chair. I know what you're thinking... Fantastic! I just need a better piece of stuff to tie her in. She looks precarious in the pic, but I can rest your fears and tell you that she cannot slip.
I was the only one who bid on this at a local auction. Go figure.
mm
By the way, Miss Grumpy has a slither of tooth through the gums, as you might imagine with those cheeks. And by grumpy, I mean that, rather than giggle and laugh at everything, she just smiles at most things and be's nice. Instead of terribly, ever-so nice.
Posted by Bobby La at 9:45 am 2 comments:

You Must Look At This!

Emily Barletta
and her blog.
And you've got to say that, but for being half a planet away, she and Gooseflesh are twins! I love Goosey La!
Posted by Bobby La at 7:58 pm 2 comments:

Since You've All Been So Nice 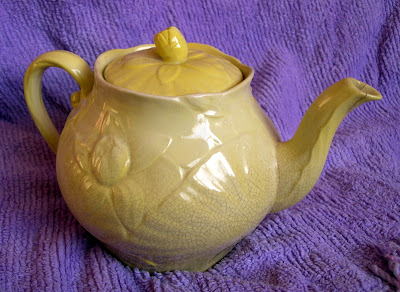 I thought I'd show you my beautiful teapot, dragged out for a bit of ceremonious tea drinking in honour of the new tea-cosy. Or, as Shula would put it, correctly, The New Tea Cosy. 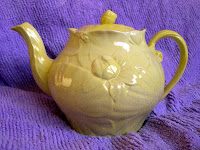 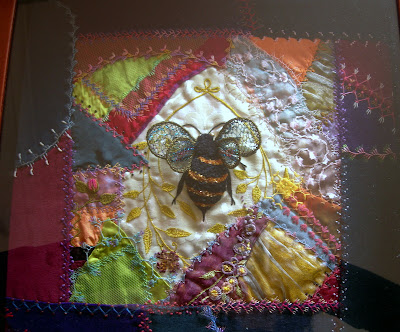 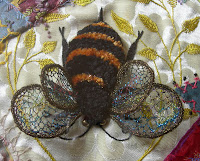 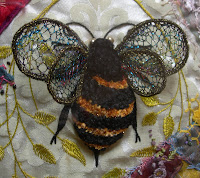 And difficult to photograph, being in an elaborately constructed, glassed box-frame. I did this in late 1997. Just as I was on the finishing run, Jane Nicholas's first book came out, bless her. Finger on the pulse. Zeitgeist. All that.
It (Fluff Fluff) is made in three seperate pieces using calico or something... Fluffy Stitch / Velvet Stitch / Ghiordes Knots / Turkey Stitch. I call it Velvet. Actually, I usually go straight to Fluffy.
Then you applique them onto an already embroidered slip. Now look, if you want further instructions on how to do the wings, I'll give them, but you have to ask or I won't feel it neccessary. Happy to, but not if no-one cares.
Hang on, I'll go photograph my background design... haven't done it myself but others have... Might as well post them here since I'm not doing classes anymore.
Have a look here too, for other applications. 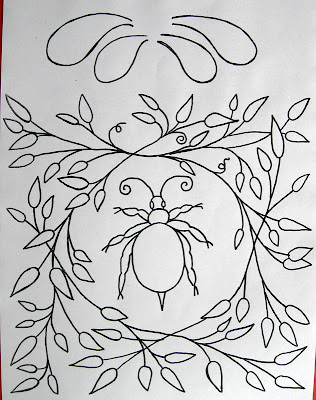 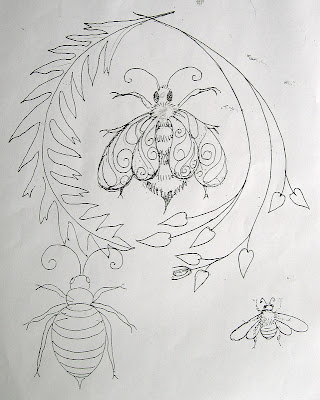 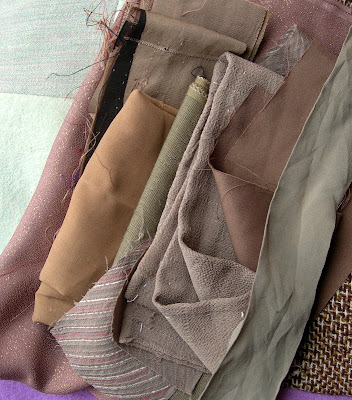 Hill Street Richmond. Just off Church south of Swan. Delicious. There's more but it's not brown and this is the relevant brown section.
Posted by Bobby La at 1:36 pm No comments: 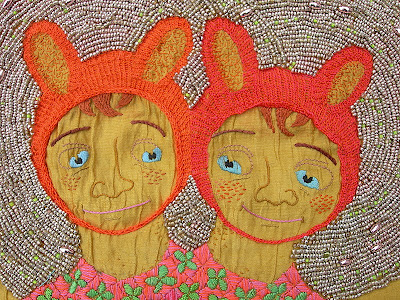 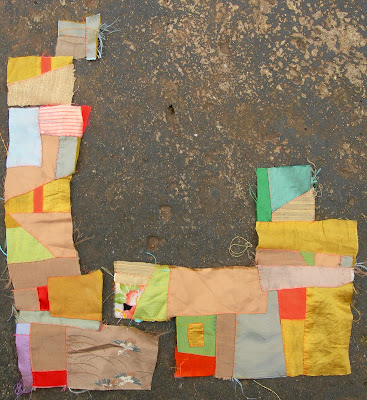 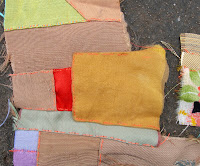 I haven't been idle, in fact I've been busy, but not at the computer. I'm onto the border of this piece now... hence the need to go to Kazari yesterday... although I'm not entirely satisfied with the availability of the exact shades of brown I needed. Sometimes, usually, that's a good thing. It makes you think sideways and stops you being too predictable in your work. I think. The faces will lose their wrinkles magically when the piece is stretched.
Turns out I'm too busy to watch the SBS movie and I can't speak Khazikstani (spell?) so have no idea what's going on. The occasional look as I walk past tells me it's sweet and lovely.
P.S. The couched "golles" (girls) will be tidied up (get their ends clipped) just before it goes into a frame and not a moment before.
Posted by Bobby La at 1:23 pm 1 comment:

It's A Happy Day Today! 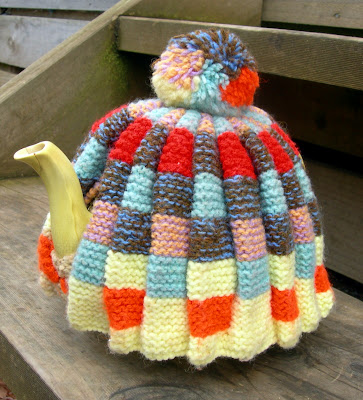 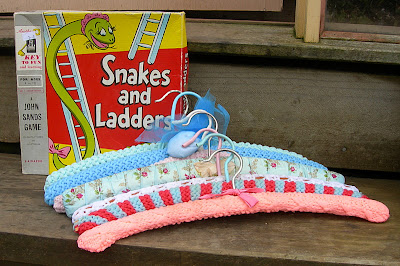 I walk past the closed Op-Shop in the morning and peer in the window, then again in the evening and I peer again. I saw a couple of these best-design tea-cosies and this one in particular screamed out that it wanted to come and live at my house. I tried to figure out who I could bully into getting it for me and had only one person, but she would have to put the kids in the car or pusher, and make a trek... I didn't ask. But, Tra La! Bonus day-off! New glasses, which I am about to pick up... coffee and a read of the paper at the local coffee shop... the 1am SBS movie looks like it's gonna be just the ticket... Lee Lee's coming over for tea to tell us everything about her trip O.S. and I can't wait to get into my embroidery!
Oh, that reminds me, I went to Kazari yesterday arvo and bought some stuff... I'll show you later...
Posted by Bobby La at 11:25 am 1 comment: 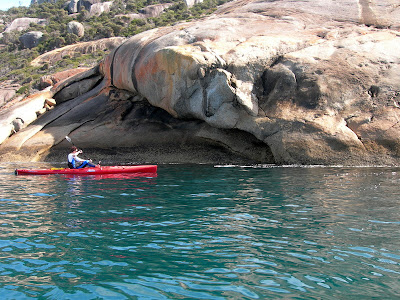 Above: About to go into the mouth of a giant turtle. 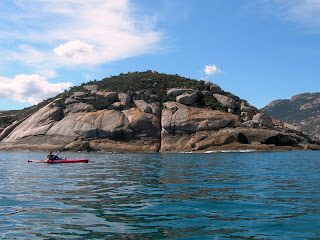 Which is clearly the nicest place in the world. I've been going there (the southern-most tip of Oz, Wilsom's Prom.) since I was a little (small to medium) blossom-pie. The place gets inside your skin, even into your blood. This rocky outcrop is between Tidal River and Squeaky Beach, Squeaky being to the left out of shot.
The bottom picture shows what in different light, or if seen in the flesh, looks like a giant, pre-historic fish. I wonder if the indigenous people had a name for it? Ross calls it bum rock.
Posted by Bobby La at 9:37 am No comments: 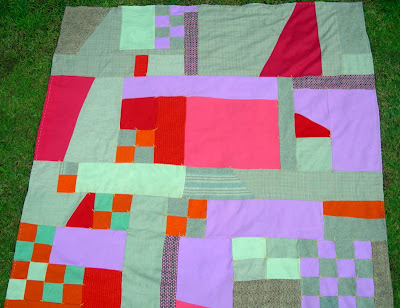 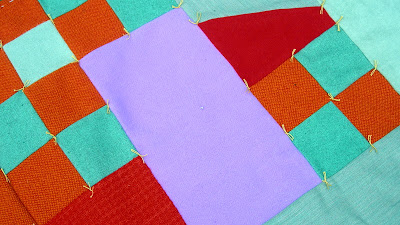 This Is Leah's (my one true's eldest child and my favourite Lee Lee) Wagga for her 21st. Notice the date. Now, the guilt is that I haven't made my own kids one each yet, and I have none for myself. But these things will be rectified. No excuses. I have too much fabric... beautiful fabric. AND... classes are almost finished for ever. Never say ever you say? Well...
EVER!!!
And my babies will benefit. This is the beginning of an era where doona's have covers and quilts have binding on the edges. Where bodies are adorned with new, handmade and interesting clothes. Where shelves labour under the weight of jams and chutneys... Hmm, maybe not but you will understand the intention.
And, I have to complain loudly... I take a day off due to uncomfortable asthmatic tendencies and a need to get new glasses, and it's overcast and threatening to rain... which is good because I won't be able to weed the garden... but I have no other opportunity to take photo's. I leave for work in the dark and get home likewise.
The day is happy, but the light is dull, so please excuse.
Posted by Bobby La at 9:15 am No comments: 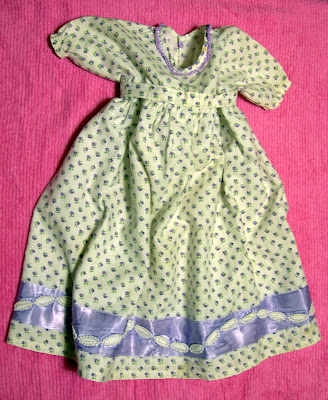 I had a crap day at work. I had to quantify some difficulties I had with a colleague. Every single person has the same kind of difficulties with this person. I had to do this because I mentioned (to her) that her behaviour (toward me at the moment in question) was unnessessary and hostile, rather than explain my methods which she was so vocally and publicly condemning. I'm nice (I am) and I wasn't mean but it's going to the top. The Big Top. And not Pee-Wee's nice Big Top. Hopefully when she gets to the top she'll see a new, exciting, enticing view and decide to go over there. My bosses (as in big boss and bigger boss) told me I was right and true and apologised for having to respond. They hope the same things about the view and what her opinion might be about it.
But today, gearing up for tomorrow, I had more important things to be miserable about and I resent the intrusion.
Lucille Melia, January 4th, 1982 - September 4th, 1982. My third child and second daughter.
This year my darling grand-daughter is a couple of weeks shy of the same age, as is her mother to my age at the time. The age gap between baby and devoted older brother is not much different either, so it's... it's not scary because nothing is going to happen and I'm not superstitious... it's just acute. Sharp. And I ache with love and sadness as I cuddle Mercedes and remember my own daughter, frozen in time at 8 months old.
I wrote something a few years ago and posted it here, if you're interested.
Posted by Bobby La at 9:13 pm 3 comments: