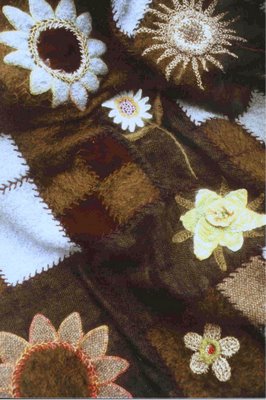 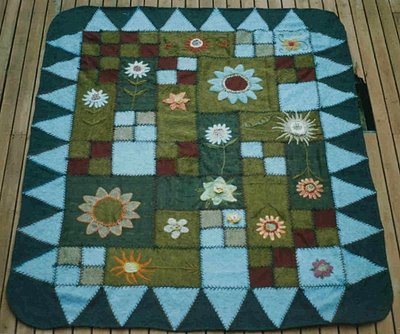 This is the first of the heavily embroidered Wagga's. I made it for my son's 21st birthday but unfortunately it was burnt in a house fire. Fortunately he wasn't (shudder). He was very upset about losing it though, as it too is made from Grandma's coats.

The blue is cut from a gorgeous woollen boucle 'swing' jacket. Lovely cut to it and I seriously hesitated before giving it the snip. But I don't suit the faded, slightly aged blue and wouldn't have worn it, so managed to muster up some courage. I used every last scrap in this and my little grandson's Wagga.

There is also a dark mossy green mohair that a friend found for me. Kaye worked in an op-shop and called me and said "A skirt has come in and you want it." She was right of course. It's woven in Scotland (land of most of my forebears), and had a multitude of colours in the fibre... very pretty. (Kaye where are you? Havn't seen you in ages!)

I have a couple of squares left from the rug that didn't get too damaged in the fire, and I'll eventually make at least some big cushions for Rob. I made him another more Japanese looking Wagga, which I'll photograph too. Lots more to photograph...

The colours in this are soft and I've limited the palette, which brings a certain sophistication to the piece. I'd like to reproduce this colourway, but really, the fabrics were unique and I doubt it could be done. Also, I don't want to embroider the rugs these days.
Posted by Bobby La at 10:16 am

Hello - I followed some links and wound up here. I very much admire the beautiful Rob's Wagga, but I have some questions that I hope you wouldn't mind answering. I'm from the States, and new to quilting: what makes a quilt a Wagga? Is it the material used, or a particular method of assembling it? I noticed the embroidery on the front, which put in me in mind of Victorian crazy quilts...

wow! I know this is an old post but I just had to leave a comment on that beautiful Wagga. The blue is incredible. How sad that it was lost. Did you ever make the cushions?