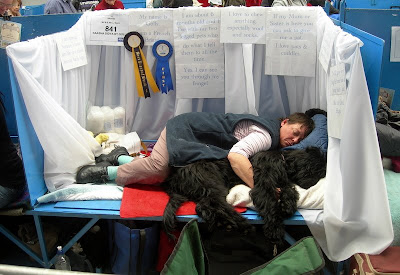 I think every single person in there had champagne or wine, or had had some, or had had lots, maybe? Hundreds and hundreds of people were filing past this happy lady and her (favourite) dog. Lots of people laughed when I took the photo too. Ha ha ha!
Posted by Bobby La at 8:46 pm 2 comments: 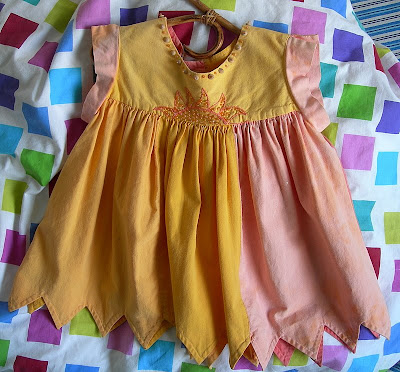 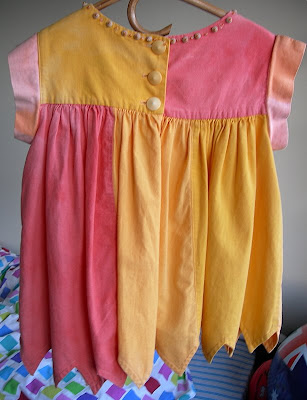 Which will soon fot her daughter Mercedes, although Sadie isn't the red-head her mother is (and suits pinks and purples, not oranges and yellows). S'pose I should make her one of her own.
Posted by Bobby La at 8:43 pm No comments: 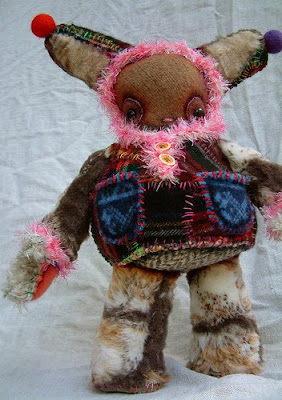 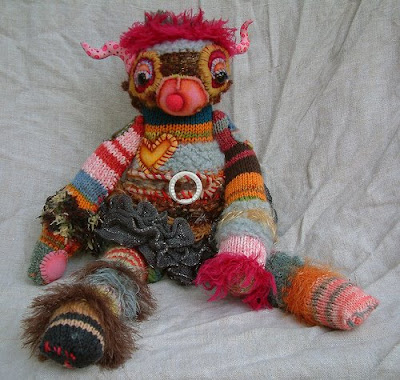 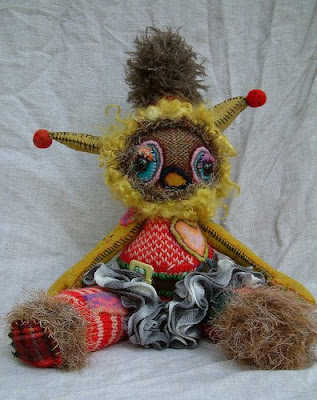 I can't believe that karna1268 doesn't get a squillion comments on every single thing that she does. Just LOOK at this beautiful thing!
Posted by Bobby La at 6:33 pm 2 comments:

So Many Great Things On This Inter Net Thingy

Check it out people.
You can see that I have access to a computer and nothing much else to do.
Posted by Bobby La at 9:10 am No comments: 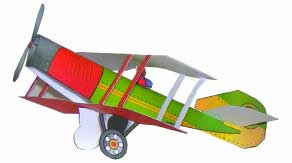 I found this whilst doing a bunny image search. It's via The Toymaker. So's the 'plane.
We love Paper Craft at our house. I've had a long running (true) love affair with Agence Eureka and my little girl's little boy has spent many a day at Grandma's house (ie. my house) with sticky tape and scissors... mostly we get them from here, but really, you must have a geek here to see the whole selection. I love this girl. She's a national (earth) treasure. The car is amazing.
Stuff. They've all got lots of stuff.
I want to be able to print things and use them but not have the print fade. Got any suggestions? 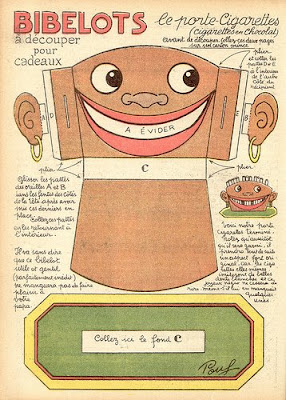 The World Is Getting Smaller

I've been let loose with a desk and a computer at work, with much time to play. Whoo Hoo!
I found The Project Gutenberg, which is a thingy where they upload loads of books for us to use for free!! Bloomin' Fantastic! I had a little browse and found this book. I love knots. 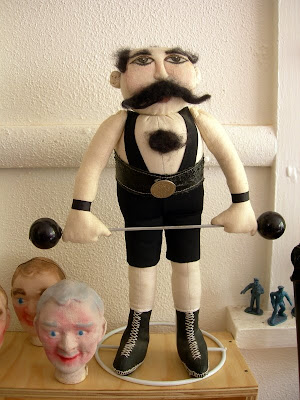 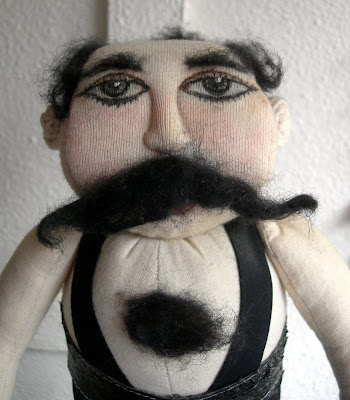 This is one of my Mum's dolls. I've coveted him for some time and now he's come to live here, unless my brother thinks he should have him. Maybe. Maybe Ill let Glenn have a go at it. S'pose I should. Hmmm...
Posted by Bobby La at 1:53 pm 1 comment: 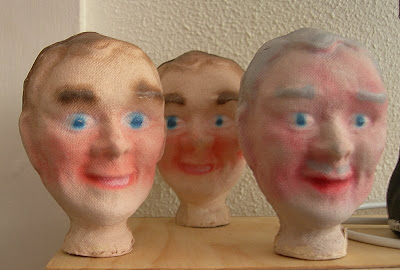 They look like pedophile's anyway. You can tell by the shiny skin.
I found them on Smith Street at a junk shop (expensive retro junk) for $5 each. Not too bad eh? They have at least a hundred if you're interested.
Posted by Bobby La at 12:10 pm 2 comments:

Two And A Half Years Ago 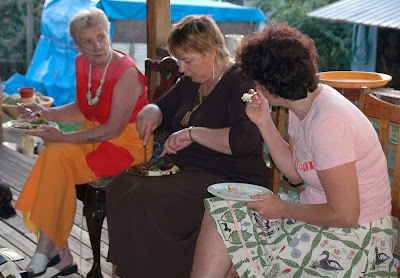 Mum is looking at me... I'm obviously blethering about something or another. I hate showong photo's of myself, but the context is everything.
It's one month today since Mum died. I can't imagine it to be so long and it's shitting me. I miss her, I want her back now... we've done our bit of suffering and I'd like everything just as it was please.
Just after this she went onto a drug called Aredia, which made her nauseous and gave her a lot of pain. She went down from then. The sickness continued after she stopped taking the drug (meant to give her bone density, but failed). The doctor (Gerstman in Ringwood) was meant to monitor the progress of the drug with blood tests before and during the treatment, but we didn't know that at the time. In the U.S.A. people are launching class actions against the company apparently, but here, the doctors say it is effective quite a bit.
I need to lose some weight. How can I make fat clothes? I think I'll go off my thyroid drugs eh Shules?
Posted by Bobby La at 8:24 pm No comments: 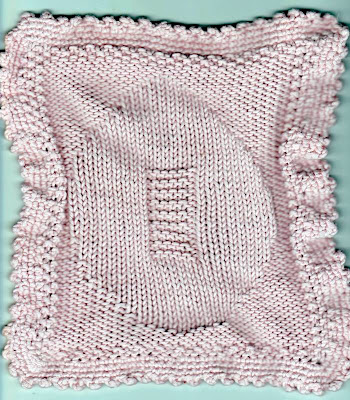 No self respecting footy player would wash his smelly face with it, but I like it.
Here's the pattern. I had to do a bit of maths to turn it AFL, and one end fared better than the other so there's no use trying to share my adaptation...
Posted by Bobby La at 6:12 am No comments:

My Brother Is 52 Now 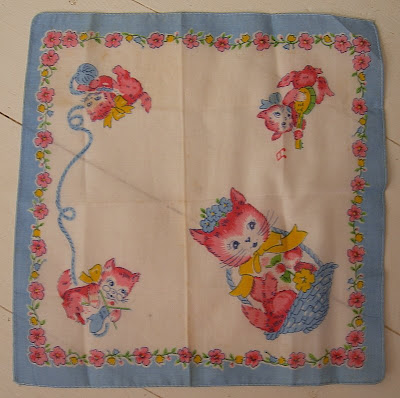 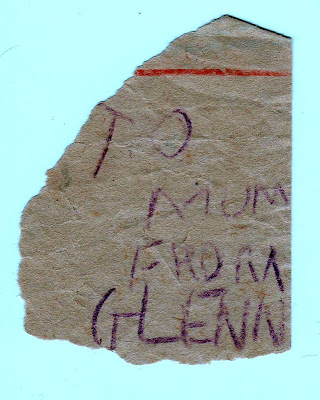 So this little package in one of Mum's many little packages is entirely (100%) retro no matter how you look at it. Do I have to give it to him? He won't care for it. I will on the other hand, and would undoubtedly add it belatedly to my curtains. Sigh... I'll tell him tomorrow.
Posted by Bobby La at 9:11 am No comments:

The Last Photo Of Lucille 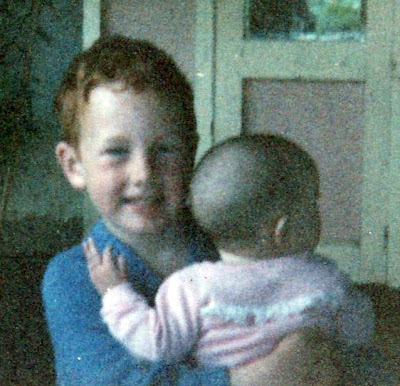 Seen with her ever loving brother Rob. Pretty hands. Bit grumpy as I recall and only he could make her laugh at such a time.
Today's the anniversary of her death. I have to (hate to) admit that the pain does recede and dull. Scab and scar over. My grief then was continuously overwhelming without relenting, for a long long long long time. I had an unwavering faith in heaven and so on at the time which didn't stop the pain of seperation, but perhaps made me accept things differently. Now, I think the whole thing sucks. And people who try to make me believe in heaven seem like they are rubbing salt in my wounds. Taunting me cruelly.
When she (might have) turned 21, the pain all came back. Sometimes I want to make myself feel it, but it's not that easy. Other times I think that I'm not thinking about it but get innundated with memory and wanting and don't know (nor question) where it comes from. But it comes and I cry as if it was yesterday, and not 1982, 26 years ago.
There's a thing I wrote which you've probably read but if you haven't and want to, it's here...
Posted by Bobby La at 8:27 pm 1 comment:

Me, Some Time Ago.

Found in the deep recesses of my father's house. 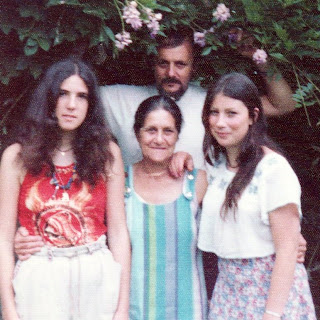 Dad had just picked me up from Sydney and brought me back to my Granny's house in Yackandandah. That's me on the left, newly hippified and saying Far Out and changed forever. There's my dear friend Rhonda, who coincidently had moved to Yack where we became best ever friends. Everyone wished I was more like her... responsible, good and well... responsible. I kind of agreed. Lovely girl. 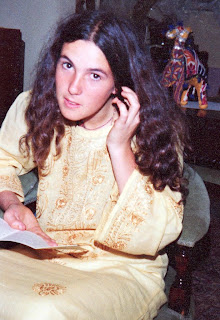 A few months later, Christmas Eve. My brother was in NZ and it was the first Chrissy without him. Mum was sad and I can't find the photo of her from that night. It's my favourite. I'm 17 and a half. 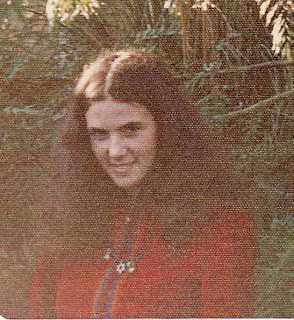 18 ans 2 days and just about to go get married for f##!!'s sake. Grandma made and embroidered the cossie. It had a big white wool half circle skirt with velvet rainbow around it.