Re Vamp of an Old Jumper

I’ve recently discovered ‘Fruity Knitting ‘ on You Tube and have learnt a great deal, including how to Edit or Alter garments that do not fit.
This is my first jumper. After having knitted a heap of face washers and deciding I could probably actually make a garment, I did this. Circa 2009.
It is Kate Davies’s Paper Dolls. I’ve knit it again and that one was too small! Note To Self: Recreate the colours of the second, too small version in another attempt.
So, with confidence borne of watching a few FN episodes where Andrea, the hostess (etc) cut and Kitchener Stitched back together a panel of a cardigan, I realised I could keep the doll section of the old, tatty Paper Dolls and a fair amount of the wool from the body (in order to have a similarly faded blue) and rework the entirety of the jumper, Top Down! 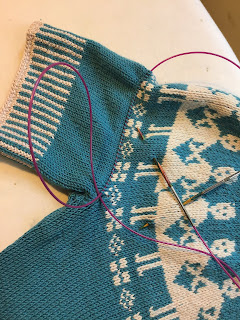 So, you slip your cable through a row of knitting, in this case I’ve started with a row just below the pattern, then snip a single stitch of the row under your cable. Then you painstakingly pull the loose end out, loop by loop. 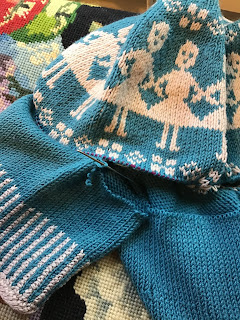 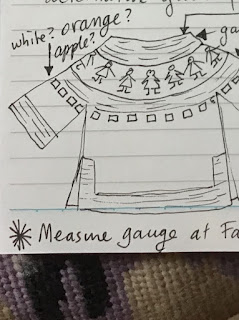 I scribbled a bit of an idea at work yesterday, in my trusty notebook companion (which I must read to see what else I intended to do this weekend)...
I thought I should do a row or two of the blue, then could add a band of... even mohair? Or a blend with a different texture than the original? Perhaps in a shelly pink? Plus, rather than keep to the quiet blue and pink, I could add flashes of orange or sunset yellows to give it a new angle. We'll see.
Anyhow, it's fun to do this. I haven't the heart to throw it out and because it's a roundel, it doesn't suit cutting up for one of my Wagga's.
Wish me luck.

There's no doubt about you Rob, you're wonderful. Always looking for a new angle or something different. You're a girl after my own heart. :)