'The Offering Of The Heart' 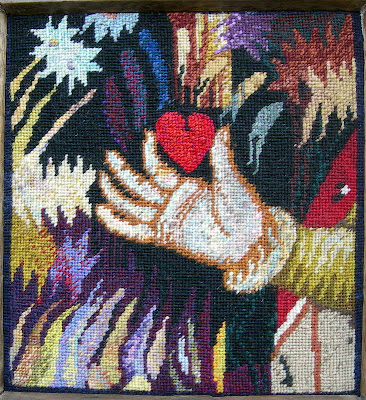 I copied (interpreted) this picture from the cover of 'The Wife Of Martin Guerre'. The book, in turn, had used a small focul detail from the large medieval tapestry called 'The Offering Of The Heart'.

I'd not long seen Kaffe Fassett's book Something 'Inspirations'... what were they all called??? Anyway, he had three photo's side by side... one of an old plate with roses on it, one with the outline of a drawing of the plate's design drawn on canvas, and one with the design half worked in tent stitch. You could tell the whole process from just that page! He was great like that. Maybe he still is? So I enlarged the design you see here on a photocopier and traced the outline onto fine canvas... 14 count, and began to 'colour in'.

What you could see from Kaffe's picture was that he hadn't tried to copy the roses exactly, but had interpreted the design. A revelation!

I made two, so when I ran out of thread on one I picked up the other. I didn't refer to each other, but only to the picture. One I gave to my former brother-in-law and his wife and one I have given to my daughter.