I've Always Thought I'd Make Lace In My Old Age... 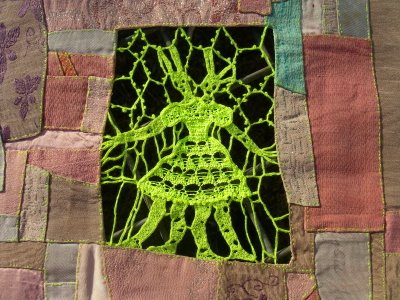 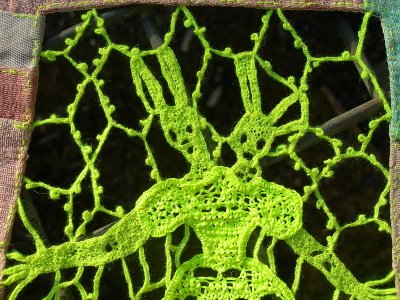 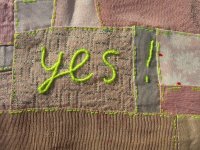 ...but with my eyesight beginning to need assistance, I thought I'd better not leave it any longer.
I met a woman, many years ago now... Jean Goldberg. Jean made lace and taught the same. Her specialty was needlelace, which is the one that appeals to me. I watched her, or rather, saw a piece she was working on, and was able to determine how to about it. I tucked it (the plan and the knowlege) away for another day. She also gave me a magnificent book on the topic, which I pored over and read from cover to cover. Well, from cover until I was a bit over it...
Interesting history, lace. For example, techniques such as Broderie Anglaise and Irish Crochet were developed because it was ILLEGAL for commoners to wear lace! So we, the people, found a way to emulate it without risking whatever the punishment might have been. In one European country (I'd have to look up which one) it was a hangable offence to emmigrate if you were an artisan, and to take your knowlege over the border. Treason, apparently.
The figures are quite traditional. Or, using figures is. Perhaps having conjoined twin bunnies is not traditional, although now that I sit and write about it, many fanciful figures such as mermaids and monsters were common in ancient pieces, so even there I'm inadvertantly following tradition. Ha! Never thought of that.
My one true love doesn't like them at all. It's the fluro yellow thread, which clashes with the soft browns and pinks. And it does clash uncomfortably, but that's what I really wanted to do, clash. And for some reason I had to use that colour. I didn't want it to be right.
Any psychoanalysts out there? Feel free to tell me... I can take it.
He has a point, but they're not finished yet and I can see the vision splendid.
I have another one on the go, and have taken some pics, so I can show you how it's done. Perhaps tomorrow. Have to have something for tomorrow.
Posted by Bobby La at 6:22 pm

And I forgot to mention that I particularly love the design. I sometimes wonder what our great grandmothers would think of modern craft design. It was so much more traditional in those days. But this, this is wonderful.