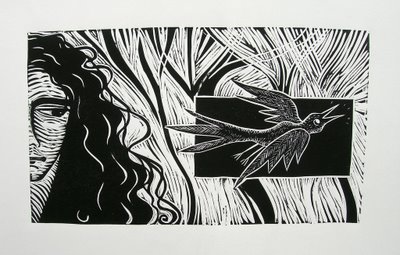 Aah! it feels good to have gotton around to stuff!
Go and have a look at my pictures. The moods vary, so don't be frightened.
This picture here was inspired by a time when we (Titchy Rowe and I) were caught playing along the trainline when I was a very little girl. Little enough to believe Mum when she said a little bird had told her. There were so many birds down the bush, it was no use, I thought, we couldn't get away with anything. I can still remember the vision of little birds flitting about that passed through my mind.
When I made this lino cut, I gave one print to Mum and Dad. Mum said she'd been fooled by the same story when she was as small. She was with a little friend, and they decided to go an absolutely forbidden way home from school. It was past the air raid shelter, during war time. Mum said they stood there in the forbidden, exciting place, and said every swear word they knew... 'Stick it up your jumper', 'Gee Whiz', 'Holy Cow', 'Strewth', 'Sugar'. Then a bird flew off and she was sure they were sprung. She was petrified for weeks!
Posted by Bobby La at 7:58 pm