I Bought This Off Etsy 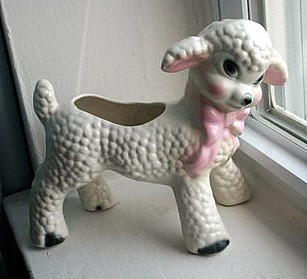 From Tigerluxe. She sent it right away and put a little present in (a tiny paint box set) which made me even happier. Lambie is a beautiful, larger than she looks. It's about 25cm long.
Happy Lamb La!. I've got three lambs now.
Thing is though, I signed up to Etsy to sell stuff! It happens (to me) all the time. I have sold one thing (a pattern that I then emailed as a PDF file which is a very modern thing to do) but it doesn't cover the cost of Lamb.
I showed my fella and I explained that it was an accident... I just went 'CLICK!' and it was done and he said Good on You! It had to be. Which is true and it wouldn't have mattered to me if he wasn't impressed but it's nice that he said that. Might because he's so incredibly SPENDY!!!
Posted by Bobby La at 3:48 pm

Well if you collect lambs it is a NECESSARY expense!!