I Watched 'Elizabeth, The Golden Years'... 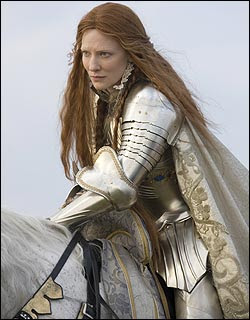 I love Cate, of course. Our Cate. I might almost have noticed nothing except her beauty and the costumes!!!!... the fabric and the lace and the amazing designs that would leave Star Wars trying for a new idea in fashion and failing. Designs so extrordinary and beautiful that you could be tempted to doubt their historical accuracy. Go Bessie!
BUT, it is the most appaling movie I have ever seen, apart from every other block-buster from Underbelly to Who Knows What Else. Why is it that the film makers think we can't concentrate without a love interest that overwhelmes what is (in this instance) one of the most interesting moments in western history? Banal script, unworthy of both actors and historical characters alike.
And who is that man? Clive Owen. He was brilliant in Sin City, where his wooden acting was needed and appropriate, but here he was only ever 'reading lines' and badly. The music was in constant crescendo... like trying to whip up an orgasm when you really want to watch the tele and never quite get there... or if you do, it's distracted and you've numbed the edges by too much application... It becomes very tiring very quickly.
There was one Monty Python bit that made us laugh out loud... some poor bugger who's been severly hurt on some ship, just begging God for mercy and BOOF! Another cannon ball takes him out.
10 out of 10 for cossies. Worth a geek just for that. And it might make you want to check out the real history.
Posted by Bobby La at 12:03 pm

You must watch the TV series, 'The Tudors'. Costumarama and at least one orgasm per ep (there's, not mine)