Unsuccessful (But So Boopy) Baby Shoe 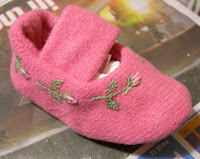 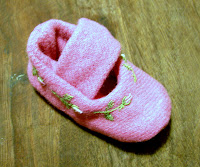 I knew as I was doing it that the lining needed to be thinner fabric and not the same wool as the top, but like an idiot I went ahead anyway. I didn't like the pale pink grub rosebuds anyway, so I didn't care. Now I like the pale pink rosebuds. Doesn't matter that it didn't work, nothing to it. It's fiddly, but not difficult. And they're SO CUTE! Busting to make them again. Shula sent me a couple of old patterns which I have altered and will post (the new pattern) when they're tried and true.

Now, I saw them first at Poppalina, which linked to mollychicken's photostream on Flickr... which isn't this book but is similar. In fact this one might just be better.

Please don't get me started on the Japanese craft books. They send me into an aquisitive frenzy.

You say 'boopy' too? You know, we really do speak the same language. I actually thought that was a family word. Not the first time you've done that.