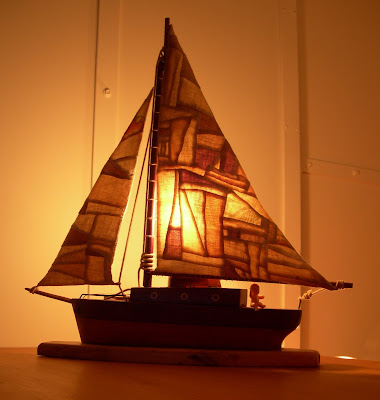 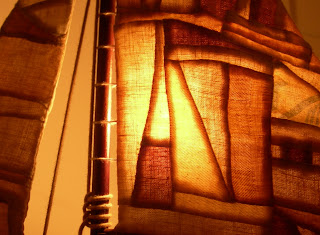 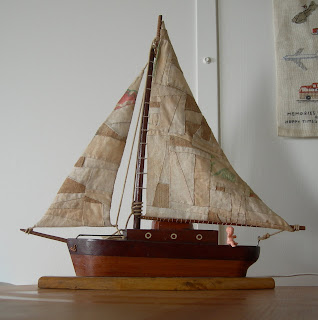 I bought this home made lamp from Cowes on Phillip Island, and I then made the sails (Korean Wrapping Cloth style) and gave it to my beloved before he lived with me. Now it is at our caravan down near Wilson's Prom, the best place in Australia, or equal to.

On the bottom I copied the old English poem:
'Blow, northerne wynd,
Send thou me my swetyng!
Blow, northerne wynd,
Blow, blow, blow.'
And eventually, it did.
I have a close-to-finished large piece done in the Choson wrapping cloth style. Big. There was an exhibition at the Immigration Museum in Melbourne many moons ago and I was completely knocked out by it and had to do something immediately. I think I've posted some pictures so I'll have a look and link it in. This is a detail of my brown cloth. It's a style of working that I absolutely love to bits and has completely changed the way I piece, as can be seen in the newer Wagga's, particularly Leah's, and this one I did at Geelong College. My own brown cloth isn't neccessarily recognisable as being in the Korean style. Inspired by.
Posted by Bobby La at 7:23 pm